The Birth of a New Movement!

If corporations paid their taxes, the wealthiest 2% paid just a little more and we ended the wars in Iraq and Afghanistan- we would not be in an economic crisis and the American dream for ALL our citizens would be viable again.  Let's Rebuild the American Dream!

Fight back! Be a part of history. Sign up to attend a house party near you!

The notorious Supreme Court Five have done it again- They just struck down Arizona's Clean Elections Law. This is huge and terrible for democracy- they are intent on enthroning corporations as the rulers in our country- the people be damned.

"Progressives must realize that the democratic process is under attack from institutions and interests that do not want majority participation and majority rule."

He has accepted expensive gifts, failed to report his wife's income for 20 years, spoken at ultra right-wing fundraisers organized by the Koch brothers and has refused to recuse himself from cases, like Citizens United, where he had a significant conflict of interest. His wife's Tea Party group- Liberty Central will benefit directly from the unlimited corporate donations to influence elections that the ruling allows. Harlan Crow, a real estate magnate from Texas, gave $500,000 to start Liberty Central. Eleven cases of Crow-affiliated groups have come before the Supreme Court, but Thomas did not recuse himself from one of them, and voted in a way that benefited Crow and his cronies in all cases but one.

Kudos to Congressman Chris Murphy who is calling for an investigation into Thomas's ethical lapses. Murphy would also like Supreme Court Justices held to the same Ethical Standard of Conduct as federal judges. And while they are at it they should look into why Liberty Central is tied to organizations that call for the overthrow of the US government and one whose director called the Spanish Inquisition "a beautiful thing".

Sign the petition to demand Thomas stand down. And here's another asking for him to be impeached.

Private Prisons Lobby for Longer Sentences and for More to Be Imprisoned!

A new report shows that making profit from incarcerating citizens is a very bad idea. Remember what happened in PA when two judges sent five thousands kids to harsh juvenile detention facilities for minor offenses? The judges, now in prison, were getting kick-backs from the private facilities for the added "business". This report shows how the for-profit prisons are lobbying and making campaign contributions in return for policies that hurt our communities, reduce public safety and increase costs.

There should be NO profit in human suffering- in war, illness or imprisonment!
Posted by Clear Stream Media at 2:50 PM No comments: Links to this post

1. Man Chooses Prison for Health Care
He is a regular Joe- having worked hard all his life- but he lost his job three years ago and his new job in a convenience store did not offer any health benefits. He had a protrusion in his chest, arthritis and other problems. When the pain got too great, he went to a bank teller, handed a note demanding $1.00 and sat quietly waiting for the police.

We are the only industrialized country in the world where a citizen would have to take such a desperate measure. He should be the poster child for the sickness of our profit-driven medical-industrial complex.

2. Gov Walker Grants His Office New Powers to Slash Medicaid
Legislators won't have to take steps to cut the popular Badger Care health care program in Wisconsin that serves about  a million people and the public will have no opportunity to weigh in on the issue. King Walker is intent on slashing help for Wisconsin's neediest.

3. Five GOP States Shut Down Planned Parenthood
Indiana has led the charge to defund Planned Parenthood . The organization provides contraception, STD testing and treatment and cancer screenings and prevention (abortion makes up just 3% of their budget) to over 5 million nationwide (seventy-five percent earn below 150 percent of the poverty line). Planned Parenthood “estimates it prevents more than 620,00 unintended pregnancies each year, and 220,000 abortions.”

Over 9,300 Medicaid patients in Indiana will be denied reproductive health care from today on.

4. Al Gore Admonishes Obama for Not Doing Enough on Climate Change
In an article in Rolling Stone, Al Gore takes on climate change and Obama's ineffectiveness in rallying the public to fight it.

Gore goes on to say that despite some green initiatives in the stimulus package, "President Obama has thus far failed to use the bully pulpit to make the case for bold action on climate change." Gore concludes with five things we can all do to meet the crisis.

5.Some Good News, Finally!
The US Conference of Mayors voted to pass a resolution calling for and end to the wars in Afghanistan and Iraq, saying the $126 billion spent there annually should be used for urgent domestic needs. It is the first time they have taken such an action since the Vietnam War.
Posted by Clear Stream Media at 11:12 AM No comments: Links to this post

Just returned from vacation- so sorry for the hiatus in posting. Luckily, I didn't seem to miss much in the mainstream media- as it was Wiener, wiener all the time. Now I'm getting back to sharing news that the corporate media ignores and censors and have lots more to share- so come by often!


1. Climate Change! This video was taken from an op ed by Bill McGibbon, head of 350.org. Over 40 million people have already been displaced by climate change, the North Pole is melting, the severe weather is breaking all records- yet the deniers persist in their obdurate refusal to acknowledge the painfully obvious.

"The intensity and frequency of extreme weather events is increasing, and this trend is only set to continue. With all probability, the number of those affected and displaced will rise as human-induced climate change comes into full force." Elisabeth Rasmusson, the secretary general of the Norwegian Refugee Council

2. Monsanto's Round Up Causes Birth Defects
A new paper co-authored by international scientists at Earth Open Source, Roundup and Birth Defects- Is the Public Being Kept in the Dark? cites a 2010 study that shows that the glyphosate based herbicide, Roundup causes birth defects as well as "endocrine disruption, damage to DNA, reproductive and developmental toxicity, neurotoxicity, and cancer".  The big news of this paper is that the industry was aware of this fact in the 1980s, and regulators knew in the 1990s, but it was kept from the public. Independent scientists who spoke of the dangers were "ignored, denigrated or dismissed".

About 70% of Monsanto's genetically modified crops are designed to be Roundup Ready- that is they can be dowsed with large quantities of glyphoste without dying, but killing surrounding weeds. The genetically altered crops don't die but contain reservoirs of potentially high levels of glyphosate, that transfer to animals and consequently to humans. After repeated use- even the weeds don't die- but become superweeds that are nearly impossible to kill. Farmers have had to abandon farmland to superweeds. More toxic herbicides like 2,4 D (a component of Agent Orange) have had to be used and Monsanto is now talking about a 2,4 D resistant GM variety of soy and corn. Sign the petition to stop this madness.

Argentina has been described as "a massive experiment" in huge plantings of Roundup Ready (RR) crops. Over half of their cultivated land is GM RR soy. Over 200 million liters of glyphosate is sprayed annually. There have been high rates of birth defects in that country. In a small town bordering soy farms in the province of Cordoba, the Mothers of Ituzaingo mobilized in response to the sudden increase in the local cancer rate, which is 41 times the national average.

You might want to check out another post I did on why you should never eat GMO's and join us on facebook- GMOs? OMG! Hudson Valley for No GMOs. We are all part of a "massive experiment" and we need to put an end to it.

3. The Next Governor of Wisconsin! 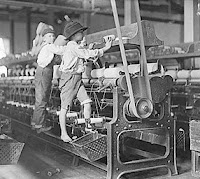 Gov Walker continues his assault on the middle class and is now pushing to repeal child labor laws. Seriously. Seems like there is nothing the GOP stooges won't do for their corporate pay masters. Similar laws to take us back to the good old days of the 19th century are being pushed by Republicans in other states as well.

The good news- people have big time voters' remorse and the recall effort is going strong.  And there are good people like former Sen Russ Feingold in the wings. Keep faith!
Posted by Clear Stream Media at 12:00 AM No comments: Links to this post