It is hard to believe this is my country.

About 40 folks went to this air force base to peacefully protest killer drones which are terrorizing and killing civilians in Pakistan and other countries. A Stanford NYU Study found that 98% killed by US drones are civilians. I also wrote about drones and helped to organize a protest in New Paltz, NY about them. You can see the write-up and video here.

One man, Brian Terrell who merely went to the gate to ask directions about how they could deliver a petition (an indictment of the immorality and illegality of drone warfare) was promptly arrested and now has to serve six months in a federal prison. Here is what Brian said at his sentencing.

"Each of the government's witnesses, all of them Air Force police personnel, testified that participants in this protest were nonviolent, respectful and peaceable in assembling at Whiteman Air Force Base, a government installation, to petition that government for redress of a grievance, demanding that the remote control killing carried out daily from Whiteman cease. They testified that at no time, before or during our protest, did they perceive us as a threat.

"Our expert witnesses testified that our behavior was consistent with the activities that the drafters of the First Amendment intended to be protected, not persecuted, by the government. The order and security of the base would not have been compromised had the security police allowed us to proceed to the headquarters to deliver our petition. No testimony to the contrary was offered this court.

"Instead of planning to accommodate a constitutionally protected peaceable assembly, however, the Air Force chose intimidation and conspired to deprive us of the rights they are sworn to protect. We learned from government witnesses that the phalanx of goose-stepping riot police is a 'Confrontation Management Team,' deployed only in the case of preannounced events. Whiteman security did not call out the Team to defend the base but to intimidate citizens engaged in lawful activities."

A local woman named Keara met Brian at Catholic Worker 35 years ago. She shared his address if anone would like to write to him. He especially asked to be kept up to date about acts of resistance and peacemaking in your community.


And please sign the petition to ban weaponized drones from the world!

Posted by Clear Stream Media at 4:44 PM 4 comments: Links to this post

Disaster Averted, Victories and Work to Do!

Visit NBCNews.com for breaking news, world news, and news about the economy

Obama had a bigger win than Kennedy, Nixon, Carter, or Bush! The American people have spoken! Boehner said the other day that there is no mandate to raise taxes on the top 2%. Yes, there is!

Going into the election, six states and DC had legalized gay marriage that was the result of court rulings or legislative measures. For the first time, same sex marriage won through ballot referendums in Maine, Maryland and Washington. In Minnesota voters rejected a ballot measure restricting marriage to a man and woman.

There will now be an openly gay member of the US Senate- Tammy Baldwin of WI.

In Iowa the right wing tried to oust a State Supreme Court justice because of the court's unanimous decision in 2009 to allow same-sex marriage on equal protection grounds- in the past they were successful in taking out three justices. This time the voters rejected that idea. Similarly, in FL, three State Supreme Court justices targeted by conservatives all retained their seats. A victory for judicial independence.

Misogynists with big mouths were defeated!

America's first Hindu Congresswoman will take the oath of office on the Bhagavad Gita.

Women were clear winners Tuesday! There will be a record 20 female US Senators in 2013 and white men will be a minority in the House Democratic Caucus! 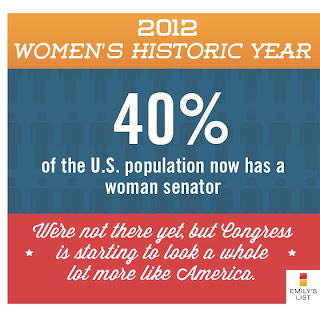 The people are demanding an end to corporate person-hood and for Citizens United to be overturned.
In Montana,75% of the voters called for Citizens United to be overturned- stating that corporations are not people and money is not speech. Five months ago, the Supreme Court nullified Montana's 100 year old Corrupt Practices Act (which was passed to fight the mining industry's domination of state politics). The man that brought the lawsuit against that Act that brought it to the Supreme Court lost his state House seat 66 to 34%. 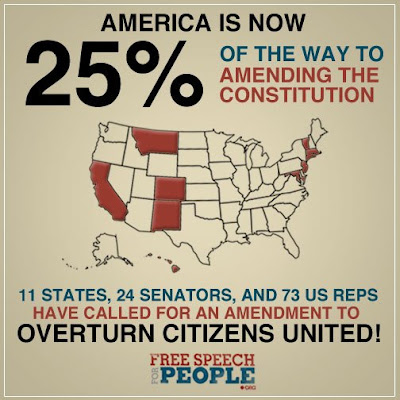 Tuesday was a also a big victory for a more sane drug policy. Colorado and Washington both passed ballot referendums calling for the legalization of recreational marijuana and Massachusetts and Montana voted for legalization of medical marijuana.

"Legalization could save U.S. taxpayers the $10 billion spent each year on enforcing marijuana prohibition, and eliminate the criminal cases against more than 750,000 people arrested per year for possession, which NORML says is 'far more than the total number of arrestees for all violent crimes combined, including murder, rape, robbery and aggravated assault.' "

Karl Rove spent hundreds of millions of dollars and had a 1% return. The eight candidates that Sheldon Adelson backed- all lost!

Time to Roll Up Our Sleeves

All this good news- BUT there is still so much to do and the window of opportunity for enacting real and meaningful change is open now and has to be taken advantage of. I'll leave you with Michael Moore's letter that sums up the work ahead of us well.

"And please Mr. President, make the banks and Wall Street pay. You're the boss, not them. Lead the fight to get money out of politics – the spending on this election is shameful and dangerous. Don't wait til 2014 to bring the troops home – bring 'em home now. Stop the drone strikes on civilians. End the senseless war on drugs. Act like a pit bull when it comes to climate change – ignore the nuts, and fix this now. Take the profit motive out of things that any civilized country would say, "this is for the common good." Make higher educational affordable for everyone and don't send 22-year-olds out into the world already in massive debt. Order a moratorium on home foreclosures and evictions. Enact economic policy that will create good-paying jobs and spend the money that's needed to do that. Make your second term one for the history books." read more

Lastly, a couple of losses in this sea of victory- In our new 19th District in NY, Julian Schreibman lost to Chris Gibson. Julian waged a great campaign and we are grateful to him for his hard work and dedication to improving the lives of average Americans. Chris Gibson- you now represent thousands of more liberally minded people who were honored to be represented for 20 years by Maurice Hinchey, one of the most progressive members of the House. You will be hearing from us!

Also, Prop 37- which would have required the labeling of foods with genetically modified organisms failed in CA. Monsanto and Big Ag spent over $45 million to mislead and scare voters. They won this time- but a movement has been born and we will eventually, like over 60 other countries in the world, have GM labeling so we know what we are eating and feeding our families. Join us on FB-  GMO? OMG! Hudson Valley for NO GMOS

Posted by Clear Stream Media at 2:04 PM No comments: Links to this post