New Video- Mothers and Others United to Shut Down Indian Point!

There was a beautiful spirit at the rally to shut down Indian Point! People brought flowers and formed a daisy chain to represent nature, life, simplicity and  beauty- all that is endangered by nuclear plants.

There were a few facts that didn't fit in the video but that are important to know. If you think nuclear power is safe because it is regulated, think again. A former Nuclear Regulatory Commission chief said that the NRC has "left it to the nuclear industry to regulate itself." A 1993 NRC Inspector General report said that inspectors are penalized (no rewards or promotions) if they find violations at nuclear plants. More on the history of the NRC's collusion with the nuclear industry.

And according to the NY Times today- company officials are belatedly acknowledging that three reactors melted down at Fukushima. There is still a threat of massive radiation poisoning the environment. In light of this disaster, the third and fourth largest economies in the world, Japan and Germany have both recently announced they are moving away from nuclear power. They are scraping plans for any new reactors, believing that renewables and efficiency can fill the gap. Tell Congress- NO subsides for nuclear power today!

Thanks again to Alice Andrews, and all who helped organize Mothers and Others to Shut Down Indian Point. A special thanks to all who participated! Thank you for taking time out on Mother's Day to take to the streets- to remind us of what is really important- respecting and protecting our earth and all life on it.

Posted by Clear Stream Media at 5:23 PM No comments: Links to this post

WAKING PLANET: Rare Sights and Sounds of Our Mysterious Universe!...

WAKING PLANET: Rare Sights and Sounds of Our Mysterious Universe!...: "Mountains on Saturn's Moon Iapetus NASA Saturn's Rings with Its Moon Enceladus ..."
Posted by Clear Stream Media at 8:35 PM No comments: Links to this post

Geurrilla theater- got to love it! And here is a great new song about the Kochs.

And here is a good one on Monsanto. Please join our new face book page- Gmo? omg! Hudson Valley for NO GMO

Wall Street is NOT too big to jail! New York's attorney general is investigating- Go Schneiderman!

Citizens literally crossing the moat and storming the castle of JP Morgan Chase!

And I'll leave you with some good news. I love these guys!

Posted by Clear Stream Media at 12:14 PM No comments: Links to this post

Mothers and Others- Close Indian Point! 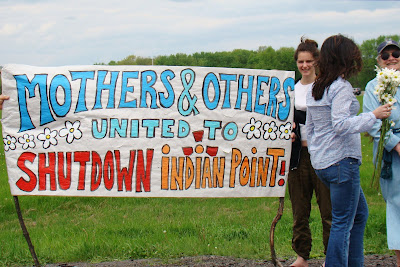 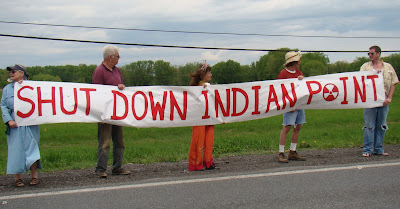 Thanks to Alice Andrews. all who helped organize and to the over 100 people who came out today in New Paltz, NY  to demand that the most dangerous nuclear power plant in the country be shut down. Organizers asked folks to bring a flower to celebrate nature, life, simplicity, and beauty; all that is endangered by nuclear power and nuclear weapons.

Many cars honked in solidarity, but one man yelled, "If we close it, we will be in the dark!" which is the myth Entergy, the owner of Indian Point would have you believe. The truth is the plant only supplies downstate New York with 12.5% of their energy and that could be replaced with strong conservation measures.
Click here for more information on why Indian Point needs to go. 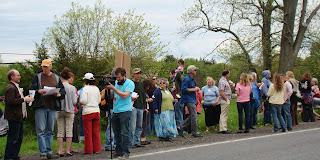 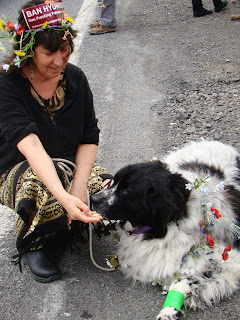 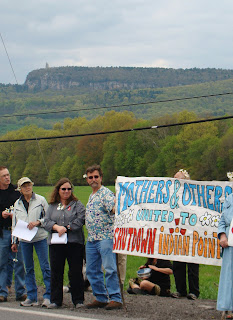 A few nights ago,  NBC News gave an update on Japan without reporting on what is happening at the Fukushima nuclear disaster! All we know is that the situation there is critical. This video shows the growing anger at the government. They recently increased the level of radiation that children could be exposed to twenty times higher than previously recommended! The radioactive playground dirt at the end is chilling.

All photos by B Upton- Video of "Mothers and Others United to Shut Down Indian Point" to come out soon- the last part with all holding hands is very moving!
Posted by Clear Stream Media at 6:00 PM No comments: Links to this post