What You Don't Know about the TPP Will Hurt You! 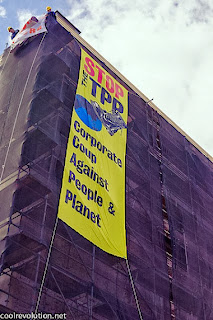 If you have not heard of the Trans-Pacific Partnership trade deal you are not alone. However, the fact that the TPP is not making headlines in mainstream news is no accident. The deal is being negotiated with such a degree of secrecy, not even members of the US Congress have been allowed to see the full draft.

What we do know about the TTP from leaked documents on Public Citizen is truly frightening. If the public knew what 600 corporate representatives were negotiating behind closed doors, there would surely be such a global outburst of protest, it would make the ground shake.

The Trans-Pacific Partnership trade deal has provisions that would:

Force the US (and other member countries) to import and sell unsafe food products
Creates “State-owned enterprises”
Cause 90 percent of Americans to take a pay cut
Raise the cost of prescription drugs and reduce access to medicines
Eliminate nearly all oversight on the banking industry
Ship millions of US jobs overseas
Limit free speech through new intellectual property rights laws
Eliminate most internet privacy rights
Create corporate owned “investor states”
Give foreign countries the right to sue the United States for “loss of expected profits”
Exempt foreign companies from US laws including, environmental, land use,banking,
public safety and health, food safety and labor, among others.

In an essay called “What’s the matter with NAFTA,” Elaine Bernard of Harvard Law quoted 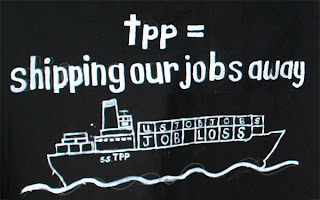 Michael Walker, an economist with the right-wing Fraser Institute in Canada, as saying, "A trade agreement simply limits the extent to which the U.S. or other signatory governments may respond to pressure from their citizens.”

The plain translation of Mr. Walker’s words spell the end of freedom and democracy as we know it. If government is more bound to a trade deal than “pressure from their citizens” then the US Constitution is essentially null and void. 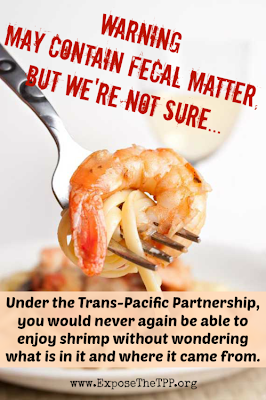 To put this in perspective, let’s say a TPP nation wants to drill an oil well in a residential neighborhood that has laws that don’t allow oil drilling. Under TPP, the company can drill there anyway because not drilling in that particular spot, represents a loss of expected profits.

That same company also does not have to comply with local environmental laws for the same reason. Additionally, if they happen to kill the last animal of its kind, or add cancer-causing pollution to the drinking water supply, that’s okay, too, under the TPP. Spending money to operate without polluting cuts into their profits.

If local citizens protest because their neighborhood is being ruined and their children are dying from pollution-related diseases, it won’t matter. The TPP gives companies the right to ignore the laws of sovereign nations. The businesses would even have the right to file a lawsuit to recoup any profits they may not collect. If they win their case in a foreign tribunal, US taxpayers will have to pay the corporation for their “losses.” 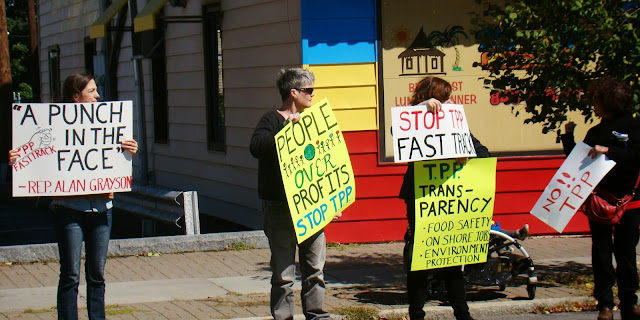 While the above is an over-simplified, hypothetical example, it does provide an idea of just how dangerous this pseudo-trade deal really is and why the people negotiating it want to keep the details secret. 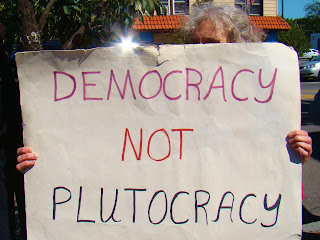 As The Guardian explains, “The TPP is an effort to use the holy grail of free trade to impose conditions and override domestic laws in a way that would be almost impossible if the proposed measures had to go through the normal legislative process. The expectation is that by lining up powerful corporate interests, the governments will be able to ram this new “free trade” pact through legislatures on a take-it-or-leave-it basis.”

The “New World Order” will no longer be a conspiracy theory if the Trans-Pacific Partnership becomes law. By design, this trade deal is a huge step toward creating a One World fascist government that has complete control over every form of life on the planet.
Some 40 percent of the global economy will fall under the control of corporate interests with the TPP deal. In addition to the United States, Japan, Australia, Canada, Mexico, Brunei, Chile, Malaysia, New Zealand, Peru, Singapore, and Vietnam will have the right to violate the laws of sovereign nations.

For generations, wealthy elitist have been manipulating governments and laws like a global Ponzi scheme. One step at a time, working-class people have been convinced to surrender their rights to the more powerful, under the guise of economic benefits for themselves.
In fact, there is little historical or modern-day evidence to suggest that the rich have ever had any intention of sharing their wealth with the poor.

Why Citizens United matters so much
In 2010, corporations were declared “people” by the US Supreme Court. The Citizens United v. Federal Election Commission decision opened the floodgates of corruption that have since poisoned US elections and the legislative process. It allowed millionaires and billionaires to spend an unlimited amount of money to create false or misleading ads to influence the minds of voters. That money filled the seats of congress with radical freshmen that pledge their allegiance only to the corporate lobbyists’ flag. The American public is barely an afterthought for the Citizens United Congress.

Had the Citizens United decision gone the other way, the world might not be on the brink of the New World Order that the Trans-Pacific Partnership will bring. But that’s not what happened and it would be naïve to think that all those election “investors” are not expecting a return on their money. 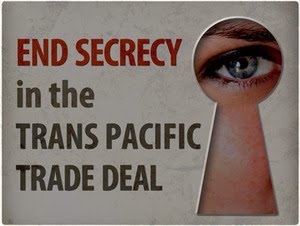 The wealthy elites want the Trans-Pacific Partnership because it’s good for them, not you. And that’s why the negotiations are being conducted in secret. The public is not supposed to know how badly they are being sold out until it’s too late.
If you live in America and you want to try to stop the TPP, tell your elected representative to deny President Obama “fast track authority” for trade agreements.

Call the Capitol Switchboard at 202 224-3121 and ask to speak to your representatives.

Posted by Clear Stream Media at 11:28 AM No comments: Links to this post 
Join the International Call to End the WTO and Stop the New Wave of Free Trade Agreements on December 3rd, the first day of the World Trade Organization meetings in Doha, Qatar. The Doha meeting will be followed by a 20th round of Trans-Pacific Partnership (TPP) meetings in Kyodo, Singapore. Negotiations for the Trans-Atlantic Trade and Investment Partnership (TAFTA) are also underway.
All of these trade agreements share the same fundamental principle that profits are more important than the health and needs of people and the planet. They are destroying local economies and public infrastructure in order to establish a global neo-liberal economic system that privatizes all goods and services. These agreements grant transnational corporations the power to change laws even down to the local level and challenge court decisions in their own tribunal that operates outside of sovereign judicial systems and cannot be challenged by domestic courts.
On December 3, we call on all allies for fair trade, peace and justice to gather in a public space at noon and declare global resistance to these toxic trade agreements. We will not obey secret deals made by transnational corporations that defy public interests and desires and destroy hard-won protections of people, workers and the environment. We demand the rights of all people to live with dignity, to meet their basic needs and to build a 21st century sustainable green economy.
Communities in the United States are starting to pass resolutions to declare that they will not obey trade agreements that cause harm to their communities. To learn how you can do the same in your community, visit “Declare Your Community a TPP-Free Zone.”
To participate in the international day of action:

Posted by Clear Stream Media at 11:48 AM No comments: Links to this post