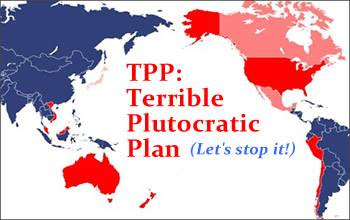 The TPP, the Trans-Pacific Partnership is being drafted with the help of 600 multinationals and with no input from consumers, farmers, or even Congress! Obama is trying to fast track it so there will be little or no debate. First personhood,and now nationhood for corporations! This would give them the ability to sue nations for anticipated loss of profits. For instance, if a country rejects genetically modified seeds, Monsanto could sue and overturn that country's ban on them.

It also "harmonizes" food safety standards that countries set, which is a pretty way to describe an ugly truth. If one country allows more e-coli to be present in meat, then all who sign this treaty will have to lower their standards and allow imports of the tainted meat, or risk being sued. This is so outrageous. Please take action- http://act.rootsaction.org/p/dia/action3/common/public/?action_KEY=8036&track=FB&tag=FB

From Roots Action-
The U.S. government is secretly negotiating the Trans-Pacific Partnership (TPP) with Pacific nations. Here are a few highlights of what whistle blowers have revealed is in the treaty:

Corporate nationhood. The TPP will empower corporations to take real nations (including the U.S.) to court and overturn their laws.
Job offshoring. The TPP will create incentives for more exporting of jobs.
Damage to food safety.
Damage to environmental protections.
Enrichment of drug companies at the expense of human health.
Banning some generic drugs.
Further deregulating banks.[3] (Read that one twice if you have to! We're not making this up!)
Forbidding the breaking up of too-big-to-fail financial firms, making them legally too big to fail.
Censoring the internet by effectively creating SOPA (the Stop Online Piracy Act) despite its failure in Congress as a result of strong public opposition.

Here is what Organic Consumers has to say about it- "Consumer Alert: Secret Trade Agreements Threaten Food Safety, Subvert Democracy"

Say NO to this plutocratic give-away!
http://act.rootsaction.org/p/dia/action3/common/public/?action_KEY=8036&track=FB&tag=FB


Here in New Paltz, NY we were proud to be a part of the global March against Monsanto on May 25 to say NO to the genetic modification of our food supply.

The rest of the world woke up on this before we did. Sixty four countries already demand the labeling of GMOs and many ban them outright. But the US is catching up. After all, it was Tami Monroe Canal, of Rancho Cucomonga, CA, a stay-at-home mom and first time activist who organized the global march! She thought 3,000 participating would be a victory- she got two million! Like other moms and dads and concerned citizens across our country, she wants safe, non-toxic food and clean air and water for her family. On Maslow's hierarchy of needs- we are talking the most basic. That is why we cannot allow profits to be more important than the health of the people and the planet.

There has only been one study on how GMOs effect humans. Even though it was short-term, it showed that the new protein produced by RoundUp Ready GM soy transfers to gut bacteria and continues to function in our bodies- no follow-up studies were done. Some animal feeding studies show sterility by the third generation. Many more prove organ damage, immune dysregulation, infertility, increased mortality and many other problems. Yet, all the media does is to parrot Monsanto's claims that their products are "substantially equivalent" to other natural foods. This is why Monsanto says no human clinical trials are necessary. On their webpage they also explain that forcing DNA from an unrelated species into another is safe because "all plants have DNA" - never mind that they have changed the genetic structure of the plant permanently and in a way never found in nature in billions of years of evolution- Monsanto says "Trust us. It is safe." Reminder- they told us PCBs, DDT, Bovine Growth Hormone, Aspartame and RoundUp were safe too.

The tide is turning. Here are "Six Recent Events that Show Beginning of the End for Monsanto". And we can add to that Maine's House of Representatives just voted overwhelmingly to label GMOs. Momentum and truth are on our side- together we can prevail.


Posted by Clear Stream Media at 1:07 PM No comments: Links to this post