What country is this?

The people in this video were protesting the killing of a young, unarmed Latino man. It has been reported that the man, Manuel Diaz, was running away when he was shot in the leg and then shot in the head.

According to the children at the scene, a  rubber bullet hit a five year old in the eye, hit another in the face and a boy was bitten.

There have been eight officer involved shootings in Anaheim this year.  Sign the petition calling for an investigation of this incident and of the escalation of police shootings.
Posted by Clear Stream Media at 9:16 AM No comments: 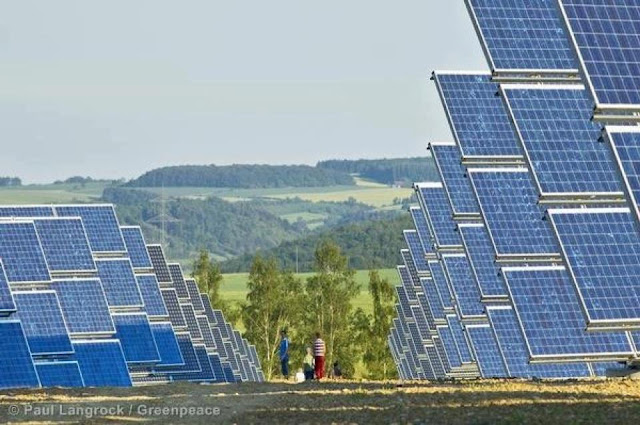 Germany is on its way to being a green energy nation! Their solar power plants produced a world record of 22 gigawatts of electricity during midday hours last Friday and Saturday - the equivalent of 20 nuclear power plants at full capacity!

After the Fukishima disaster Germany closed 8 nuclear power plants immediately and will close the other 9 by 2022. They will be replaced with wind, solar and bio-mass. It can be done! One of the ways they are way ahead of us is in subsidizing solar energy. Read more.

This is so critical. We all need to raise our voices for a more sane energy policy- especially in the light of the worst drought in 100 years in our nation's heartland, the recent Shell fiasco in the Arctic and the never ending nightmare that is fracking.

From the Occupy movement- do it yourself solar projects can supplement government subsidized solar power.  Check it out. 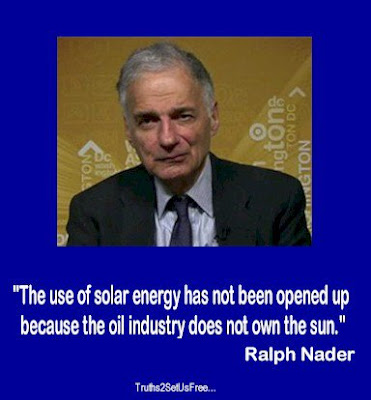 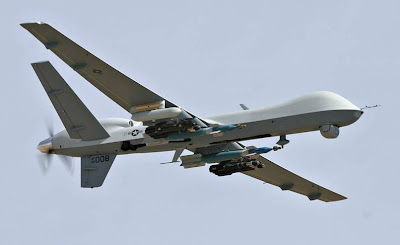 Robotic Killers Coming to a Neighborhood Near You?

I personally think this is one of the most frightening images of the 21st century. Unmanned drones that can kill from afar. In Pakistan alone it is estimated that from 2004-2012, 500 civilians were killed by US drones.

In Yemen, increased drone strikes are having the unintended consequence of increasing sympathy for al-Qaeda.

From the Washington Post-
“These attacks are making people say, ‘We believe now that al-Qaeda is on the right side,’ ” said businessman Salim al-Barakani, adding that his two brothers — one a teacher, the other a cellphone repairman — were killed in a U.S. strike in March.

The other day my husband thought he saw a drone fly over our house- it is entirely possible. There was a recent article in the NY Times magazine that revealed that drones in the US practice tracking enemies by putting civilian cars in their cross hairs and following them. Drones are being sold to local police departments at a rapid clip and they may soon be able to be equipped to fire rubber bullets and tear gas. Here is a  a map of domestic drone authorizations. Thanks to a bill Obama signed in February they can also be used for a range of commercial endeavors, from dusting crops to shooting movies.

Rep Peter King said drones “carry out the policies of righteousness and goodness.” He added he wasn't concerned about civilian casualties. I wonder what he'd say if China was using drones and killing hundreds of US citizens every year?

This Is What Global Warming Looks Like
A headline from the Guardian UK recently read "US wildfires are what global warming really looks like, scientists warn The Colorado* fires are being driven by extreme temperatures, which are consistent with IPCC projections"

Meanwhile US media fails to connect the dots. Although there were 14 weather disasters in the US last year compared to the long term average of 3 a year and 82% of Americans say they have experienced a natural disaster or extreme weather event first-hand- mainstream media's coverage of climate change  dropped 72% from 2009 to 2011. Sunday morning shows "have all spent more time covering Donald Trump than they have climate change." http://www.huffingtonpost.com/jamie-henn/connecting-the-dots-betwe_2_b_1472754.html

*And of course it is not just Colorado we are talking about- much of the western US is going up in smoke- "Fire season in the West is 78 days longer than it was 25 years ago. Since 1986, we have experienced a fourfold increase in the number of major wildfires and a sixfold increase in the area of forest burned. The average burn duration of large fires has increased from 7.5 to 37.1 days." read more

Monsanto Above the Law?

"A so-called "Monsanto rider," quietly slipped into the multi-billion dollar FY 2013 Agricultural Appropriations bill, would require – not just allow, but require - the Secretary of Agriculture to grant a temporary permit for the planting or cultivation of a genetically engineered crop, even if a federal court has ordered the planting be halted until an Environmental Impact Statement is completed. All the farmer or the biotech producer has to do is ask, and the questionable crops could be released into the environment where they could potentially contaminate conventional or organic crops and, ultimately, the nation's food supply." Truthout.org

The rider was added by Jack Kingston (R-Georgia) wa ho was named legislator of the year by the Biotech industry.

Sign the petition against granting Monsanto immunity from federal law here.
Posted by Clear Stream Media at 11:31 AM 2 comments: