TPP (The Terrible Plutocratic Plan) in the News 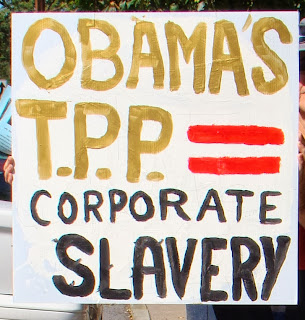 From William Rivers Pitt, TPP in the USA Is Why We Occupy, Truthout:

"The trade pact known as the Trans Pacific Partnership is wending its way to existence with the express approval and muscular push of the Obama administration. This has been happening for a while now, and almost entirely in secret, because if people knew what it entailed, they might, you know, Occupy.

Let's see...TPP favors banks over people, companies over workplace safety and the environment, coal and oil over alternative energy sources, major agribusinesses over local farmers and local produce, the absolute end of "Buy American," as well as the end of laws protecting even the most anemic minimum wage, product safety...and here's the best part: if corporations feel like governments are encroaching on corporate power and "rights" in these matters, they can sue those governments in specially-created tribunals. NAFTA has similar tribunals that have levied hundreds of millions of dollars in fines; under TPP, the rights of corporations to sue for "damages" is massively expanded.

TPP is the point of why Occupy came to exist in the first place, the distilled essence. If this deal happens, it will be the final triumph of the legal fiction known as "corporate personhood," the fraud that gives your 14th Amendment rights to a faceless, unassailable company with billions in assets and the will to use them in our already-septic political system. With this "trade" pact, they will be able to stretch those rights globally, nationally, regionally, locally, and literally right down your throat.
It sounds like a bad Batman plot. It isn't. The president thinks it's a fine idea.

While you still can." 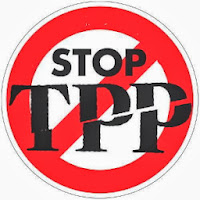 From an OpEd by David Brodwin in US News and World Report:

"Many provisions of TPP have little to do with trade per se. They simply promote the interests of powerful global industry groups and use legal and political mechanisms to limit true competition in the market place. For example: 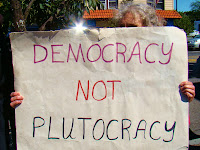 An OpEd from Michael Brune, executive director of the Sierra Club and James Hoffa, president of International Brotherhood of Teamsters- calling for fair trade not free trade. http://thehill.com/blogs/congress-blog/foreign-policy/323167-trade-is-good-when-its-fair-

Please call your elected officials today and say "No Fast Track for TPP"! Call the Capitol Switchboard at 202 224-3121. Tell President Obama what you think of his attempt to push this through Congress without debate- 202 456-1111. Sign the petition-

Most Americans now see what a bad deal NAFTA was for American workers- A May 2012 Angus Reid Public Opinion poll found that U.S. respondents who believe that the country should “renegotiate” or “leave” NAFTA outnumbered by nearly 4-to-1 those that say the U.S. should “continue to be a member” of NAFTA (53% vs.15%). Support for the “leave” or “renegotiate”positions dominated among Republicans, Independents and Democrats alike.


TPP is NAFTA on steroids. Public opposition has stopped 15 bad trade deals in the past. We can stop this one too. Keep Faith!

Our Sept 17 Action at Congressman Gibson's Kingston, NY office
TPP Opposition Growing and What You Can Do
TPP the Global Monsanto Protection Act

Posted by Clear Stream Media at 9:21 AM