People Rising to Protect Our Earth and Our Rights!

Yesterday, 48 activists were arrested for tying themselves to the White House gate to protest the Keystone XL Pipeline. The proposed pipeline is a "carbon bomb" that will increase carbon pollution to dangerous and potentially irreversible levels and create likely damaging spills. The people arrested include Robert Kennedy Jr and his son Conor, the executive director and president of Sierra Club (the first time in that organization's 150 years they approved of civil disobedience) Bill McGibbon of 350.org, NASA climate scientist James Hansen, Julian Bond and actress Darryl Hannah. James Hansen said the tar sands are "the dirtiest of fossil fuels" and that burning them would essentially mean "game over" to curb global warming.

"It's equivalent to burning coal in your automobile. We simply cannot be that stupid if we want to preserve a planet for our children and grandchildren," said Hansen.

Kudos to all arrested for preparing the way for the thousands who are converging in DC this Sunday, Feb 17 for the largest climate action in history. A Sierra bus from our area is already full, but Occupy New Platz is assessing whether another bus can be obtained if there is enough interest. Please write to Margaret Human corvasorora@yahoo.com or call 255-5727. Thanks to all who are going. You are making a difference.

From the UN Wire

Politicians are lagging behind scientists and military leaders in sounding the alarm over climate change, and the consequences could be catastrophic, United Nations Secretary-General Ban Ki-moon said this week. "It's time to move beyond spending enormous sums addressing the damage and to make investments that will repay themselves many times over," Ban said. "With the right enabling public policies, close to 80% of the world's energy supply could be met by renewables by mid-century. This is not utopian or science fiction. It is current fact," he added.

GOP Misogyny Continues
Twenty-two Republican Senators voted Tuesday against the Violence against Women Act (VAWA). Despite their obstructionism, the bill passed in the Senate overwhelmingly and now faces an uncertain future in the House. Please remember these 22!! 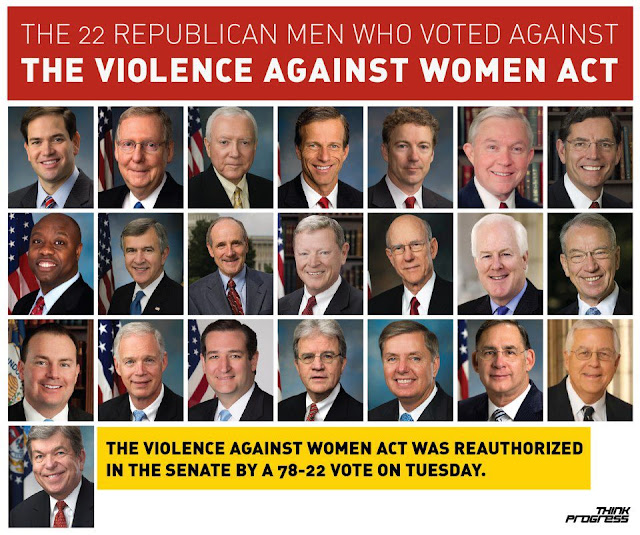 Let's Fight Back Together!

The meeting is an answer to recent conservative attacks on women’s rights, to
which we respond: Stop Violence Against Women, Stop the War on Women’s
Rights, Defend Reproductive Justice, Full Equality for all Women Workers!

Speakers, singers, poets and videos will express these demands at the rally.
There will be plenty of information and ideas to take home and use. The
program is in formation — all speakers and endorsers will be posted soon at
http://activistnewsletter.blogspot.com/.

Happy Valentine's Day to One and All!
Posted by Clear Stream Media at 3:35 PM