Seven hundred protestors (including a child) were arrested Saturday on the Brooklyn Bridge. This video clearly shows people marching on the pedestrian walkway, until police appear to lead people onto the road and right into a trap. But it doesn't matter, there is no way they can stop this movement. It has only grown stronger and bigger in response to NYPD deceptive practices and brutality (but important to note that occupywallst.org says when approached individually, many police officers express support for what the protestors are doing).

The numbers are really going to swell this Wednesday, October 5. Peace and justice activists, labor unions, environmentalists, more students and all Americans fed up with the greed of the 1%, will be joining Occupy Wall St with a march from City Hall (map) beginning at 4:30 and going to Zucotti Park- the base camp for the protestors who have occupied Wall Street since September 17. If you are looking for transportation and live in the Hudson Valley, email Dan from MoveOn at dvollweiler@gmail.com. Just heard a bus will be leaving New Paltz midday. Contact Dan for more info or use this link- https://www.facebook.com/event.php?eid=282473051782707 Let's show the young people of Occupy Wall St that we have their backs! Together we demand an end to corporate rule, a fair shake for students and workers and for all to pay their fair share. 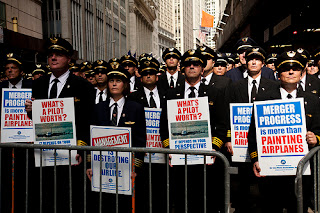 Everyday more unions, representing tens of thousands of working Americans, are joining and expressing solidarity with Occupy Wall St! The United Federation of Teachers, NYC Transit Workers, United Steelworkers, Industrial Workers of the World (IWW) two sections of the SEIU and more are on board!

Over 700 union pilots swelled the ranks of Wall Street Occupiers last Tuesday. They held signs that showed the Hudson River crash and that asked "What's a Pilot Worth" and "Management is Destroying Our Airline". First year pilots make as little as $21,600 a year.

Follow up:
The officer who had young girls penned in and then maced them is Anthony Bologna. He has a history of assaulting peaceful protestors. And it appears he is a serial pepper sprayer- here he is in action again- spraying and then slinking away.

And lest we forget what this is really all about- 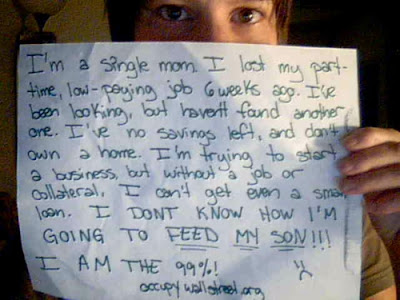 We Are the other 99%  shows pictures and stories of people in our country who are desperately hurting. Many young people hold up signs talking about their terrible student loan debt, often in 6 figures and no prospects of work.

For livestream of the global revolution! Watch the other 99% from LA , Canada, Spain and more!
To find an action in solidarity with Occupy Wall St- go to occupytogether.org.
And donate to Occupy Wall Street here!